Editor’s Note: In an effort to educate followers of Jesus regarding what is going on in the wider culture, we share news that we think the people of God should be aware of, from a Kingdom perspective. Unless otherwise stated, we make no endorsements of the links, media, organizations, or people we report on.

On October 1st, Bill Maher, liberal satirist extraordinaire, released a documentary called Religulous which attempts to mock religious belief, and promote disbelief (literally… www.disbelief.net is promoted on their website).  It’s met with generally positive reviews, with Roger Ebert saying: “I report faithfully that I laughed frequently. You may very well hate it, but at least you’ve been informed. Perhaps you could enjoy the material about other religions, and tune out when yours is being discussed. That’s only human nature.” Dr. Craig Hazen of Biola University has written a good review of the film, offering critiques of its main points against Christianity, and declaring that it “seemed to fall pretty flat in the laughs department—like it was appealing to an audience that may have been amused by it twenty years ago” .  He also adds:

Well, if it’s not very funny, then what does it have to offer?  Nothing, really, except a chance for Maher and Charles to make a fast buck (glad I got my ticket for free).  Maher is pitching this film as mavericky—telling the truth about religion that everyone else is afraid to address.  But Religulous is nothing more than filthy, nudie, druggie, and obtusey.  There is little to laugh at and nothing to learn (except maybe that if you quit being religulous you get to act like Caligulous). 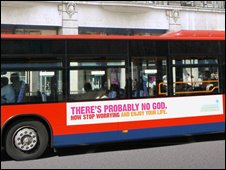 British atheists are planning to evangelize their disbelief on London’s buses by buying ads that proclaim “There is probably no God. Now stop worrying and enjoy your life.” Relevant news articles can be found at The Washington Post and BBC News.

The campaign started as a response to bus advertisements that directed people to a Web site that declared that those who do not believe in God will spend “all eternity in torment in hell.” The initial goal was to raise 5,500 pounds, enough for 30 bus ads for 4 weeks, but so many donors came forward that they raised 80,000 pounds and expanded the project. Richard Dawkins, possibly the world’s most prominent and outspoken atheist, donated 5,500 pounds and said on his website: “This campaign to put alternative slogans on London buses will make people think — and thinking is anathema to religion.” Another donor left the comment “Spread the word, and consign this superstitious nonsense to the dustbin of history! America, are you listening?” on the group’s campaign website.

The surprising thing about the project is not that it is being done, anyone that has followed the “new atheism” movement over the past few years expects to see atheism evangelized… what’s really interesting is its “positive” message. While the question of whether anything can truly be “positive” without God can be raised, its simple message of encouraging people to stop worrying and enjoy life is much less angry and mean-spirited than most of that which is propagated by the likes of Dawkins and his disciples. Though Dawkins’ jab at the stupidity of religion reassures me that he hasn’t changed his ways, and makes me wonder if he had little say in determining the slogan and would have wished the sign was a tad more aggressive and condescending.

Fellow followers of Jesus, let us impact our culture with the gospel of our Messiah, whether it be though documentaries, bus ads, or whatever else is at our disposal. Unless we stand up and submit that which we believe into the cultural landscape of ideas, while giving people viable reasons to believe, we will continually be left on the defensive. As Dr. William Lane Craig wrote with regard to his work in philosophy:

It is the broader task of Christian apologetics, including natural theology, to help create and sustain a cultural milieu in which the gospel can be heard as an intellectually viable option for thinking men and women. It thereby gives people the intellectual permission to believe when their hearts are moved.